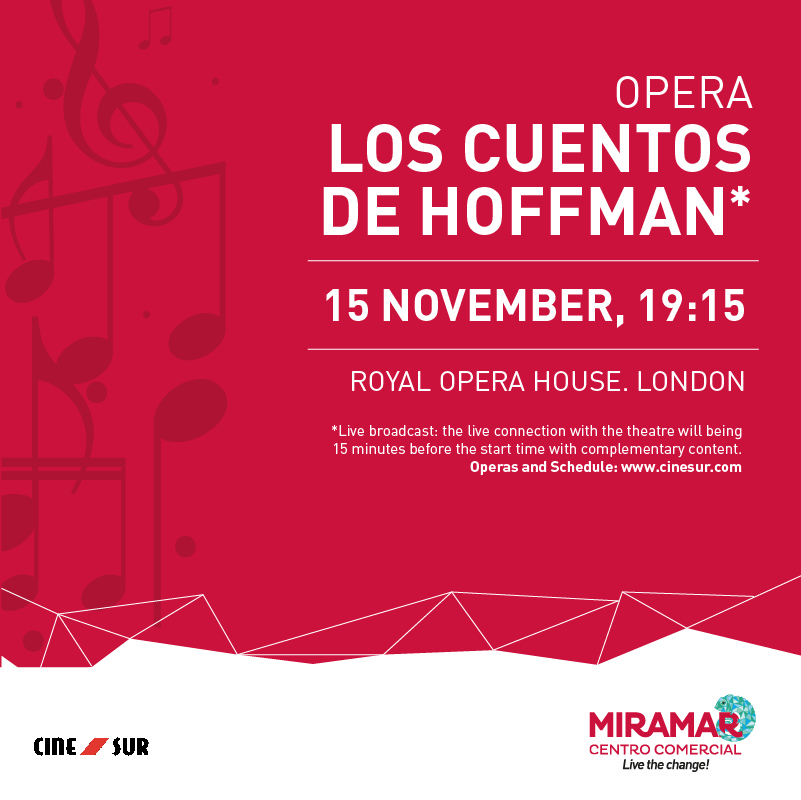 Next 15 November, you can enjoy the Opera “The Hoffman tales” by Offenbach live, broadcast from the Royal Opera House of London, at 19.15h at our Cinesur Miramar.

Vittorio Grigolo plays the main character in this opera, leading an excellent cast including Thomas Hampson, Sonya Yoncheva, Christine Rice and Sofia Fomina in the fantastic opera drama by Offenbach. This production is a real gem of the ROYAL OPERA: “Les Contes d’Hoffmann” (The Hoffmann Tales), Offenbach’s masterpiece, and also a favorite among the audience.

Created by the Film Academy’s award-winning director, John Schlesinger, this production brings to life a world of romance, comedy, mystery and threats in the 19th century. These extraordinary tales of string puppets, magic glasses, ghostly voices and courtesans revolve around the imagination of the romantic and drunken poet Hoffmann.

The charismatic young tenor Vittorio Grigolo is Hoffmann, forced to tell the story of his lovers, seized in his opinion, by a succession of villains. The excellent baritone Thomas Hampson plays the four villains. The music includes the famous “Barcarolle”, and the stunning interpretations of the masterpiece are perfect vehicles for the vocal virtuosity of Sofia Fomina as the mechanical doll Olympia, Christine Rice as the Giulietta courtesan, and Sonya Yoncheva as his last love, Antonia Hoffmann.