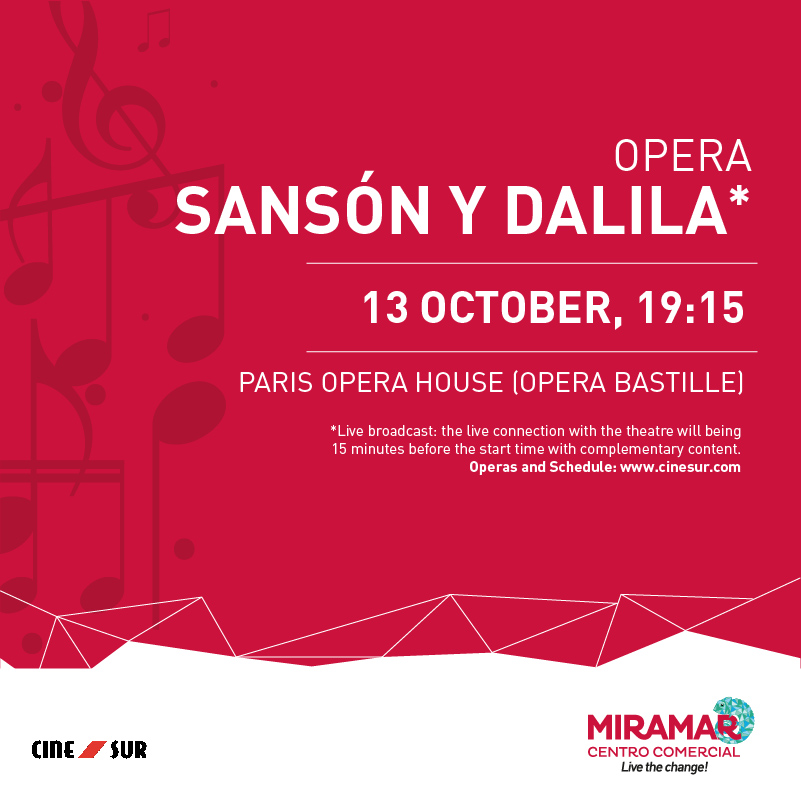 Next 13 October you can experience live the Opera “Samson and Delilah”, broadcast from the Opera of Paris (Opera Bastille), at 19:15h in our Cinesur Miramar.

In this play, and even before the curtain rises, we hear the Philistines in Gaza forcing the Israelites to work. The curtain rises and we see the temple of Dagon in the background, the god of the Philistines. The cries of the Jews blend with disregard from Abimelech. The inspiring songs of Samson move his fellow countrymen so much that an insurrection is forged. So Samson slays Abimelech. Then the Jews rejoice and praise thanking God when the most seductive maiden of Philistines, Dalila appears. The look of her attractive beauty, her tantalizing dances, trap the champion again. However, she does not really love her country’s enemy, and at this moment the secret of Samson is still unknown. Later, she deprives him of his hair, with the betrayed champion being overcome because he loses his superhuman strength. Finally, we find Samson prisoner, like an armored giant who has lost its strength. He is taken to the temple of Dagon, where Samson prays to his God, asking him to have strength only once more. While the celebration of the triumph of the Philistines takes hold of everyone, the protagonist gets between the two pillars supporting the temple producing a terrible accident…